One week ago Mossul was captured by isis. Today we went to the last buildings, reachable by armored vehicles. We came from Erbil to Mosul without any problems. According to one of the generals, we were the only journalists there so far. At the moment, Mosul seems stable and calm – but in the hands of terrorists. Many broadcast vehicles are positioned near Erbil at an Iraqi refugee shelter, where they do multiple interviews. Gasoline is short these days as most of it has been transported to the front. As a result, the queues in front of the gas stations are hundreds of meters long. Despite the long waits people stay peaceful. Soon, the provisions with gas should have stabilized.

Today we went to Kirkuk. The security situation there has been very difficult for some time now; the city has been through turbulent times during past years. Due to this, things had to clarified before we could visit: How exactly would we be able to go there via what route, and how were we supposed to go back?
The street from Erbil to Kirkuk is well constructed and has two lanes per direction. With the appropriate vehicle and driver you can go there as fast as on a German Autobahn. We waited for our escort at the checkpoint to Kirkuk. I always say: To me, the Peshmerga are the smiling soldiers. And I was right again: The soldier greeted us smiling.
First, we drove to Governor Najmaldun Karim (PUK). He gave us an interview in English about the situation in Kirkuk. Basically, he told us that although Peshmerga forces alone will not be able to drive off the ISIS they will be able to keep the ISIS out of Kurdistan.

After that, we went to the Kirkuk airport. The general there gave us an interview – in German, to our astonishment. He is a German citizen and has been living there for 20 years. Then he gave us permission („On your own risk!“) to visit the Peshmerga forces at the front south of Kirkuk. Only at this point we had to put on our protective gear, bulletproof vests and helmets. For this region there are warnings issued concerning snipers, and unnecessary risks are generally avoided.
The Peshmerga forces there explained to us that everything had been calm today and that they will do everything it takes to defend their position against ISIS. Apart from tanks they have grenade launchers and snipers. As these forces were positioned about 20 kilometers south of Kirkuk, the question as to who controls the city of Kirkuk has been answered satisfactorily.

Today we drove into the northeastern corner of Kurdistan-Iraq: northwest of Dohuk, in the direction of Zaxo at the border to Syria. There, we met Major General Sheik Ali.

He is in command of the Peshmerga forces from the Turkish border to the Mosul dam. The interpreter greeted us with a friendly „Kommt rein!“ („Come in!“ in German). The general himself told us that he had not given any interviews up to this point, „not even CNN or BBC!“. We talked about the forces under his command, how they are able to keep control over their area, and up to where they operate. On a map, he showed us where his forces are positioned at the moment and ironically advised us to ask the Iraqi premier Al-Maliki why the 30.000 Iraqi troops left Mosul so hastily.

After that we could talk to a Peshmerga special forces unit as well as to the ordinary soldiers. They talked to us about their gear and their daily life. Especially some soldiers I saw with the special forces looked, to me, as though they were able to defend Kurdistan on their own.
On our way back to Erbil I gave a 30 minute interview about what I am doing in Kurdistan at the moment.

Despite the unrest in Northern Iraq, Kurdistan still is secure and calm – except at the borders that have to be defended against ISIS. Accordingly, the Kurdish capital, Erbil, can still be visited as usual. An absolute “must see“ is the Citadel, which might be up to 8.000 years old and is therefore regarded as the oldest continuously inhabited settlement in the world. At the foot of the Citadel there is a wonderful park with fountains and the famous bazaar. If a German gets home sick there they can just go to the restaurant „Deutscher Hof“ and watch a soccer game. If you want action you can go go-carting or do round trips by helicopter. The people here are very cordial and open-minded; you can easily get into contact with nearly everybody. I really suggest visiting Erbil to anybody, even now.

It was funny to see a reporter do a moderation for his news piece about the situation in Kirkuk right next to our hotel on a construction site. I’ll have to find out whether he is staying at our hotel, as well, then I can give him first hand information. The security situation in Erbil is comparable with Berlin.

Today we spoke with people who took refuge in Kurdistan. In addition to the steady influx of hundreds of thousands of Syrian refugees during the past years, there are now hundreds of thousands of Iraqi refugees, as well. It is formally correct to refer to them as “internally displaced people”, IDP for short. Currently, the Autonomous Kurdistan Region is home to five million citizens and between 500.000 and one million refugees and IDP. The camps are all run by a whole set of stakeholders, all of which have something to do with UNHCR. The Kurdistan Regional Government (KRG) pays millions of dollars to finance the camps. Some of the camps were organized by ACTED.

The IDP camp is still under construction, excavators level the ground, helpers build up tents and organize the supply with water and electricity, and MAG (a commercial bomb disposal team that was assigned to the areas the IDP came from) issues information: Don’t touch or open ammunition, just call the MAG and leave it to them to get rid of it. The problem is that ammunition is valuable as a source of money. And if people lost everything you owned and are truly desperate, they even start opening mortar shells in order to sell what is inside them.

The people here have access to basic things such as tents, water, food and a bit electricity. Thanks to Telecoms sans frontieres there will be some means of communication soon. Best of all: People here are safe from ISIS.

However, it is distressing to hear what the IDP have to say. One of them told me that he is more scared of Maliki (and the Iraqi army) than of ISIS. At least, ISIS didn’t shoot civilians on purpose, only at those trying to prevent them from taking over the country, he said. On the contrary, the Iraqi army haphazardly shot katjuschas into areas controlled by ISIS. This particular IDP came from “somewhere around Tal Afar“, where they were shot at with Katjuscha rockets some days previously, as he told us.

On our way back to Erbil we stopped at another gas station. People still have to wait two to three hours for their 30l of gas. The situation will get better as soon as more gas can be imported from Turkey. However, Kurdistan will be dependent on imports until there are enough refineries to cover the demands for gas in the region. After all, cars cannot be fueled with crude oil.

A young man in a new Range Rover, complaining about the fuel shortage, was waiting with his motor and the AC running. We asked around if the people were scared of ISIS and the possibility that the war could take over on Kurdistan. All of them basically told us: „No, we have got the Peshmerga!“ Many also told us that they were ready to take up arms themselves, if necessary.

We will have to wait and see how the situation with ISIS develops further.

In the morning of 16th March 1988 at about 10.35 am Iraqi fighter jets flew over Halabja, a town near the Iraqi border. These fighter jets cast toxic gas on the citizens of Halabja. About 5.000 people died at once, 10.000 more were wounded or affected for life. German companies had supplied Saddam with much of what he needed for these attacks on the Kurdish people. Nevertheless, there were never serious convictions in Germany. However, one of the entrepreneurs in question, Karl Kolb, received the Bundesverdienstkreuz (Federal Cross of Merit) five years ago.

Today, we visited Halbja, the cemetery and the Halabja Monument. A sign still standing on the cemetery denies entry to supporters of Saddam’s Baath Party. 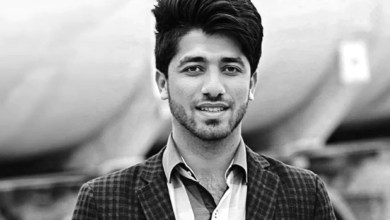 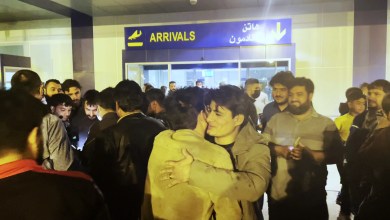 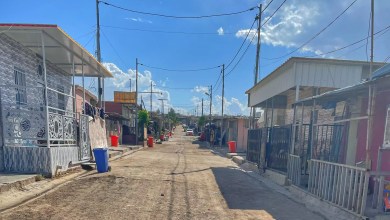 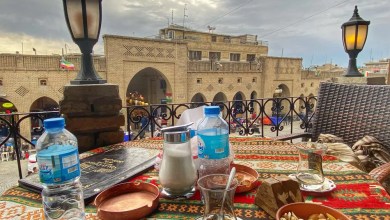